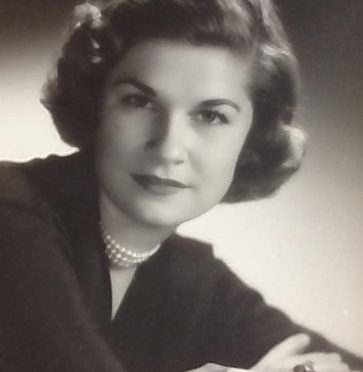 No posts were made in July for a reason. I’ve step backed from cooking and crafts to share with you my very personal loss. On the night of July 29, 2017,  Charla Molinare Boteler died.

She was my world, from childhood to the end of her life. Along the way I would be questioned how could I have sacraficed so much of my life and career to care for her for twenty years. My answer is how could I not? She was an amazing woman and mother and we shared a special bond of unconditional love. Below is the eulogy I gave at her service in St Paul’s Episcopal Church in Fairfield CT:

Last Saturday night, I not only lost my mother, I lost my best friend and my only child all at once. I was blessed to have Charla Boteler for my mother. She was the fun mom all the other kids wanted and I felt like the lucky one. She was an artist, a teacher, a role model and buddy all in one package- and it was a beautiful one too!

I’ll never forget her walking through the door of my kindergarten class with pink elephant cupcakes she’d baked for my birthday. Mom was wearing a knee length shift and a Jackie Kennedy haircut and could have been cast in the role of first lady herself. But her beauty was more than skin deep. Children loved her because she made them feel good about themselves. She inspired them to challenge what they saw and try to view whatever it was from a new perspective. She explained how that’s where imagination comes from.

From my earliest memories, coloring books were not in our house. Mom wanted to liberate me from drawing inside the lines and encouraged me to make my own coloring books. I will never forget how she handled the racial tensions that resulted from the mid-60‘s race riots. When problems came to my grandmother’s old historic neighborhood in St Joseph Missouri, Mom didn’t hide in fear. Instead, she parked her easel across the street from my grandmother’s house and started painting a picture of it! As the children gathered around in curiosity– they stopped spray painting sidewalks and started watching how to oil paint. She showed them how to mix colors and explained perspective and horizons. They watched in awe of how art unfolds.

During college, I was very determined to follow in the footsteps of Julia Child. I recruited Mom for my gopher and chauffeur as I started appearing on local New York shows and eventually the Today Show. She became my business partner and for years we made the perfect team. I developed recipes and ideas for familiar food companies and was sent around to local TV stations plugging products on morning and noon news shows. Mom was always there, waiting in the wings. When a tower of meringue-covered Toll House cookies failed to flambé on cue, she rescued me by hunting down a blow torch. One night we arrived at a Boston hotel with no place to put a dozen crudité bouquets that would never fit in the mini fridge. Mom resourcefully filled the bathtub with buckets of ice and they lasted until the morning show. No eggs on the set for a cream puff segment? Mom would be tossing them to me after we were on the air. It made for great live television. Among her many talents, Mom was also a human GPS long before Garmin brought one to market. Whether driving through Maine or Manhattan, she would never get lost.

Then in 1998, Mom lost my father, the love of her life. Overnight, the brightest woman I ever knew began fading fast. She could no longer pay bills, keep track of the days or put names to many familiar faces. She would go to Stop & Shop and keep coming home with peanut butter and paper towels but nothing that was on the list. It soon became apparent she could no longer drive or handle household tasks. I’ve long suspected that there could possibly be an emotional trigger for many cases of Alzheimer’s. This is only my opinion and based on anecdotal reports from others. Whatever the cause, life as I knew it would never be the same. My mother had become the child I never had and my business partner was now my full time business. (pause) Mom loved flowers! (AND I WANT TO TAKE THIS MOMENT TO THANK THE BLACK ROCK GARDEN CLUB FOR FILLING THIS CHURCH WITH FLOWERS AS A FABULOUS TRIBUTE TO MOM!) 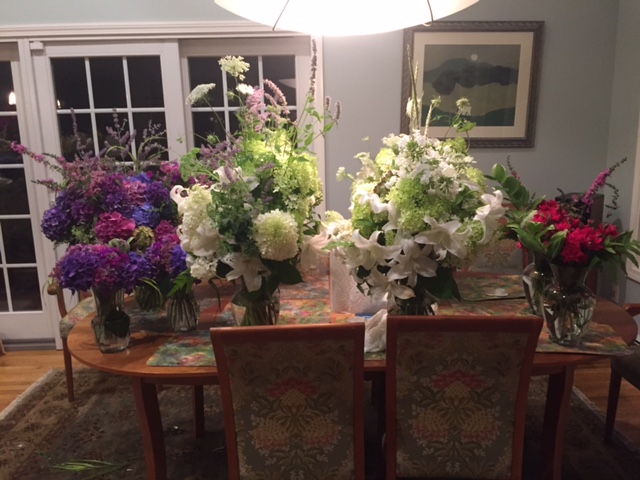 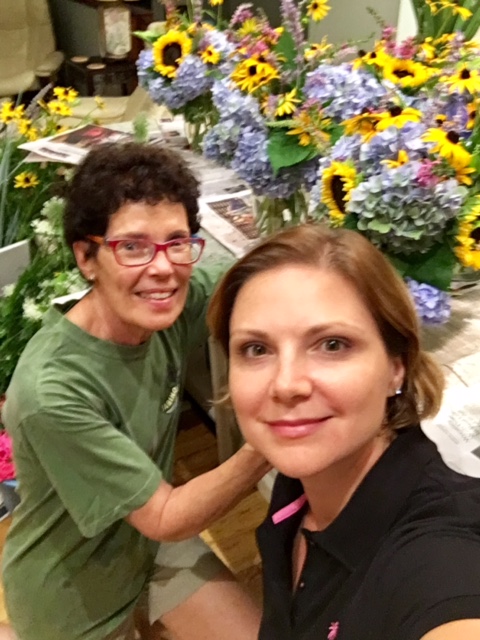 She once described heaven as “a beautiful flower garden where she could play all day long”. If she “got loose” out the front door, that’s where I could usually find her— cutting weeds from our yard and prize roses out of neighbors’ yards. They all took it very well but our home was filling up fast. Once every vase had been put to use, there were pitchers, mason jars and milk cartons holding her arrangements! 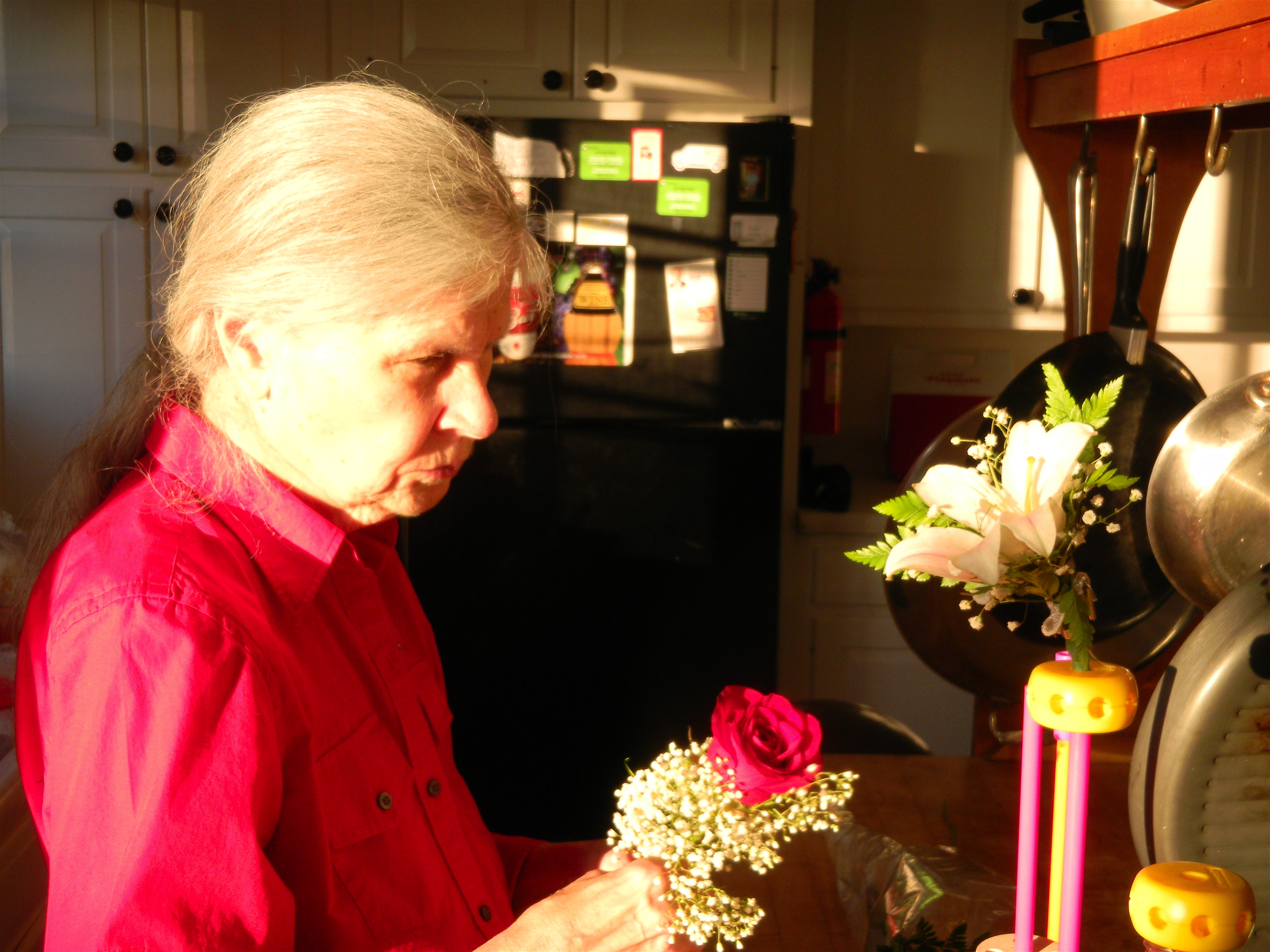 It was around this time in the summer of 2007 that I met Jim Comstock, my fiancé. The first time that Jim came to the house, I greeted him at the front door with puffy, watery eyes. It was a hot day and he looked around at the mantel, buffet and countertops seeing that just about every surface of the house was covered with Mom’s wilting floral arrangements. I felt embarrassed and apologized with “Welcome to the house of dead flowers!”.  Then explained that I was allergic to the ragweed and goldenrod. Little did I know that would be the beginning of a budding romance between the three of us. Mom was so much fun that we brought her to pizza dinner dates and parties where she soon became an A-list guest (much like the Peter Sellers character, Chauncey, in the film Being There). 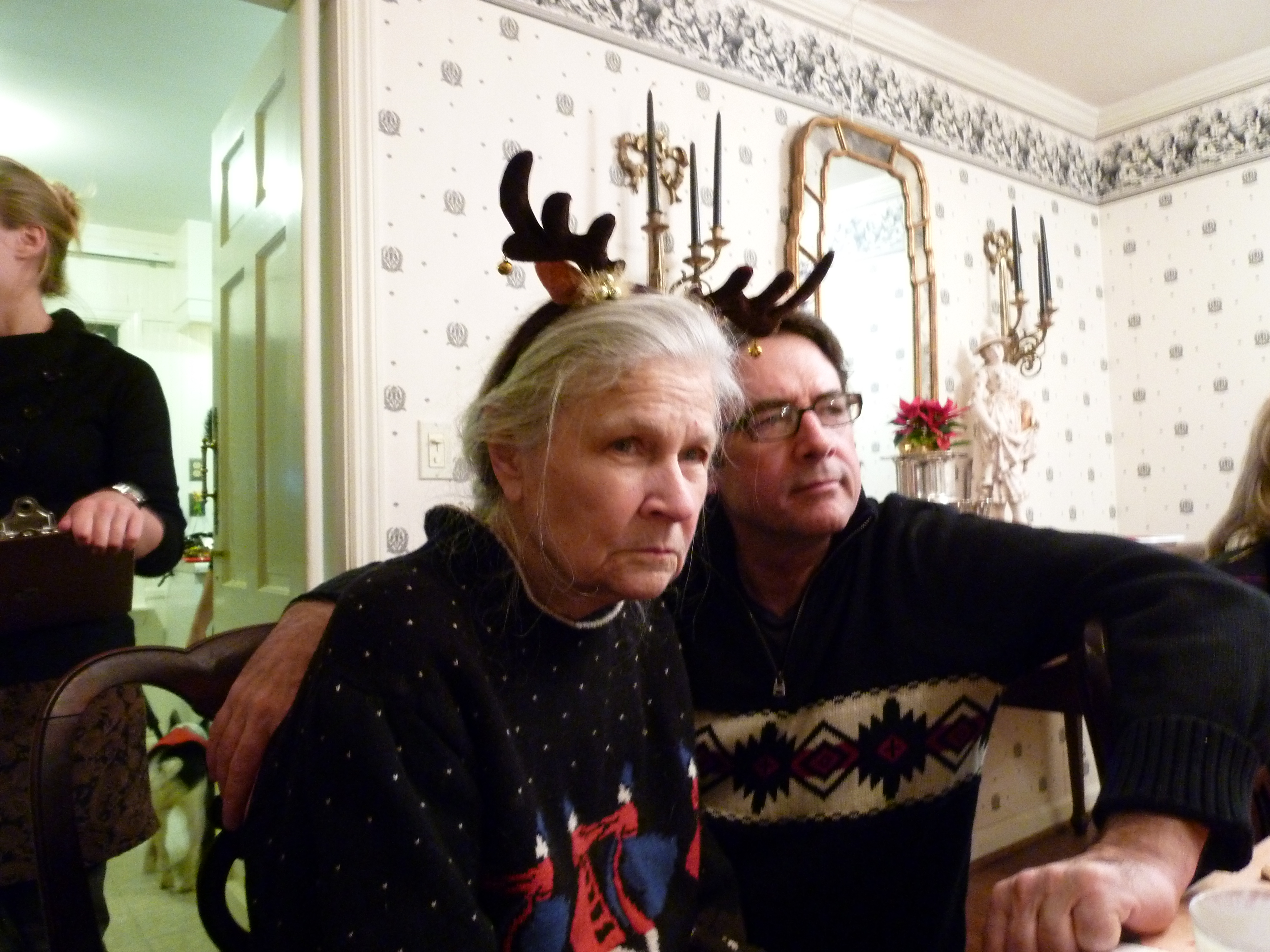 She was known for wearing all kinds of headgear we simply could not take off, from reindeer antlers to her safari hat. It came in handy because she could easily be identified over the PA system when lost in Ikea.

By 2010, something magical started to happen. Mom had always been an artist and even studied fashion design and window dressing in college. A new art form was evolving from her that we dubbed as “stacking”. These are best described as still life scenes made from household objects that were anything but still. Her stacks were usually vertical, delicately balanced and very transient. Because of gravity issues, they often fell down in a crash heard round the house. 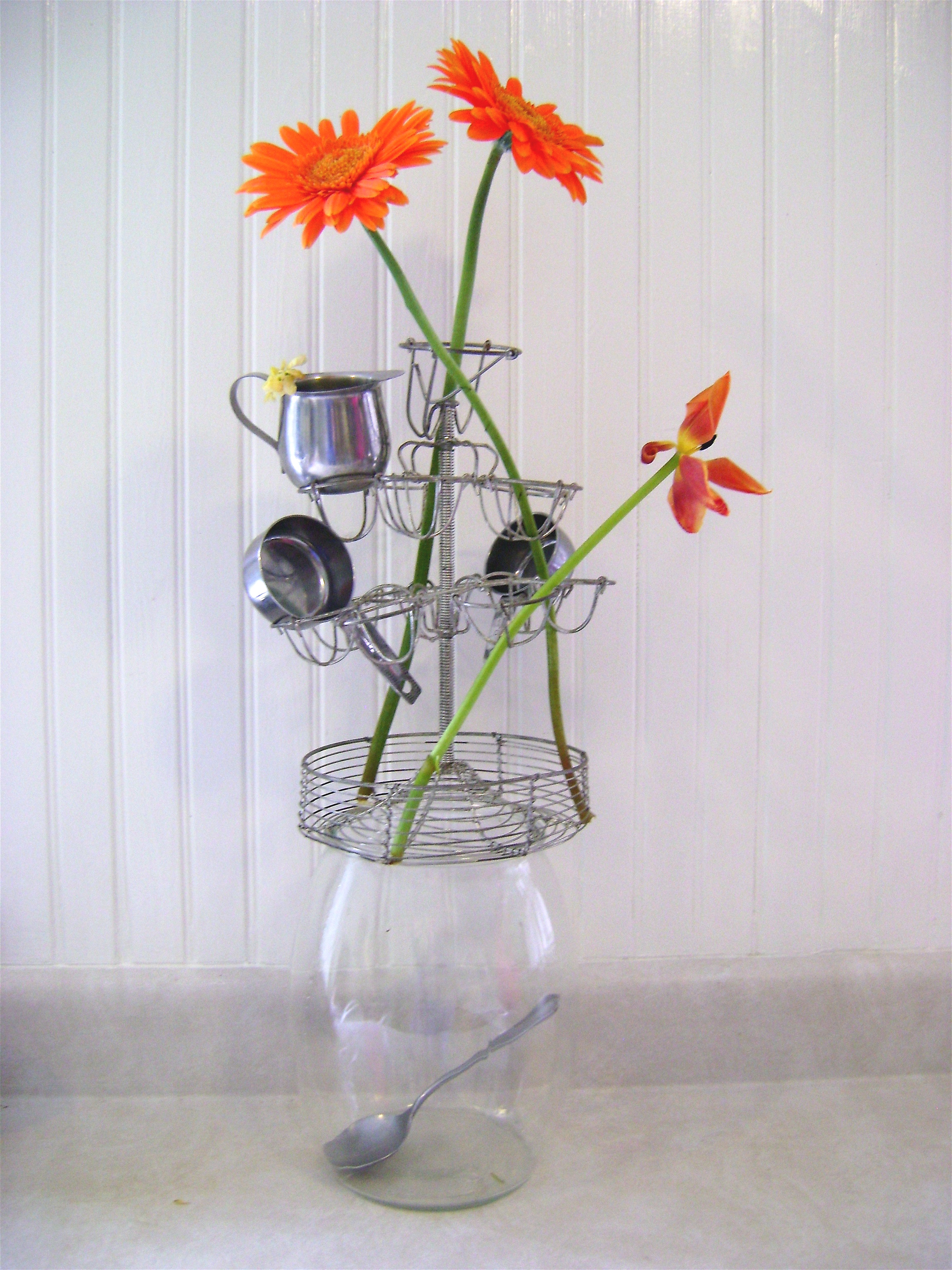 First Jim– and then I began documenting these ephemeral sculptures on film and entered them in the Housatonic Museum of Art’s curated show “Flower RePower”. Mom’s stackings featured flowers and, as she described, “Stuff that fit’s with other stuff”.

To all of our amazement, Mom won Best in Show for an exhibit called “Art in Alzheimer’s”. 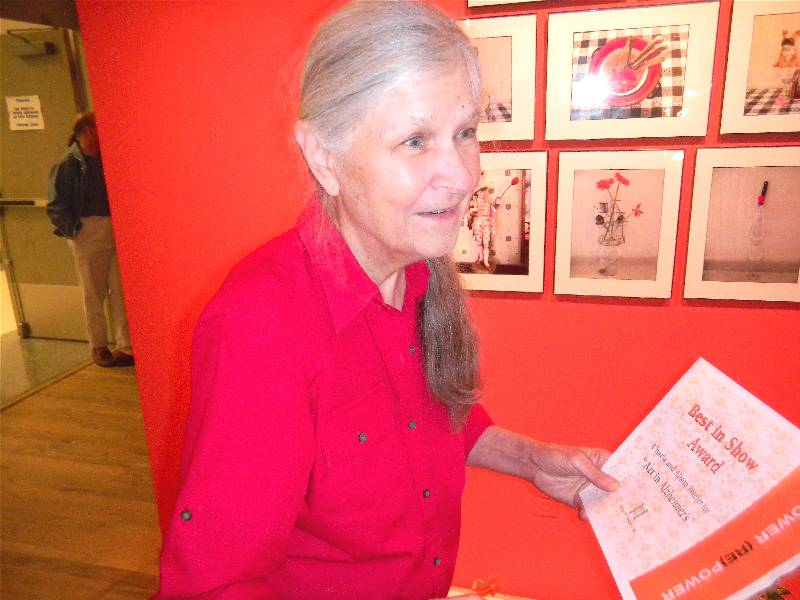 This lead to a flurry of attention with gallery showings at Westport Art Center, City Lights and a potential documentary. 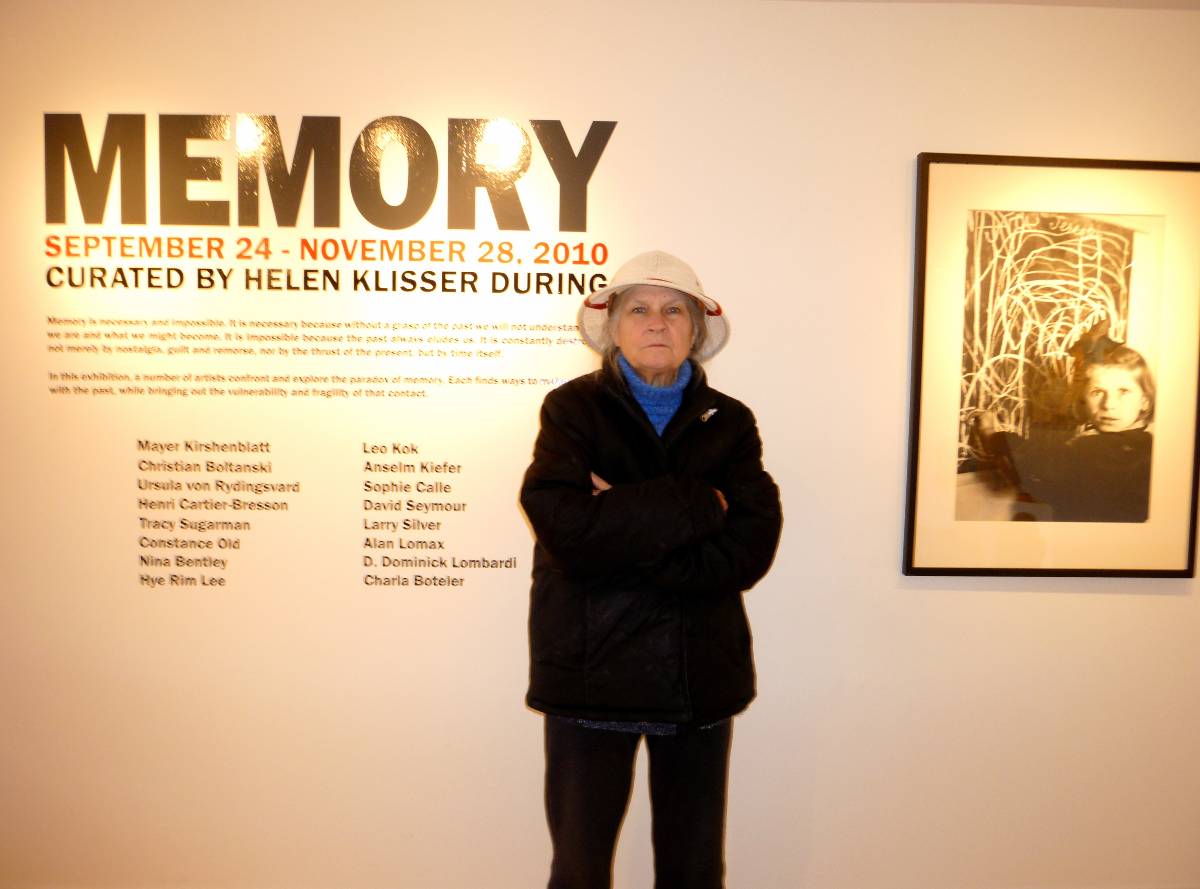 Mom basked in her fifteen minutes of fame and was even asked by The Alzheimer’s Association to come help lobby the legislators in Hartford to preserve the state caregiver respite program. 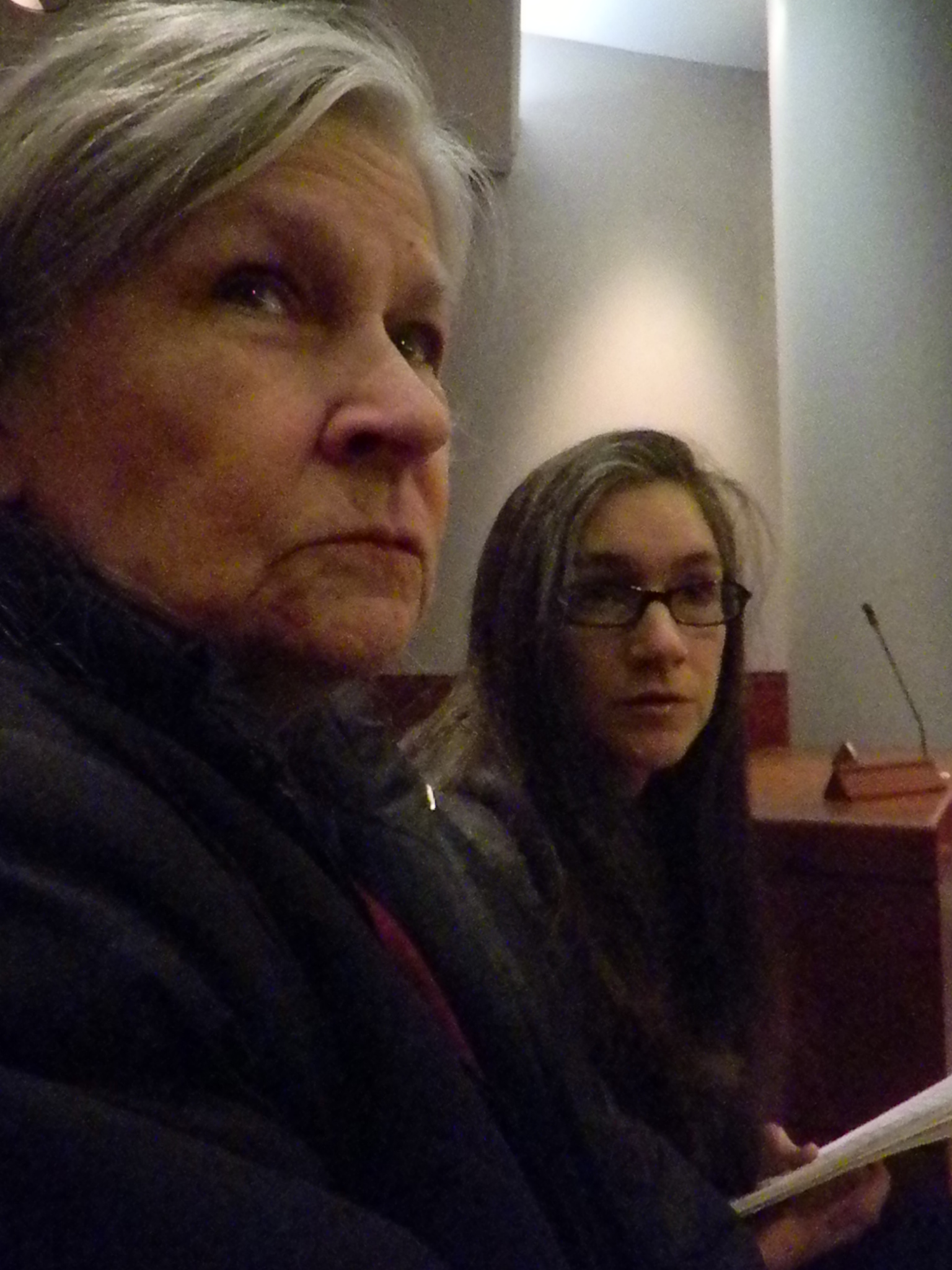 Mom was so cute. 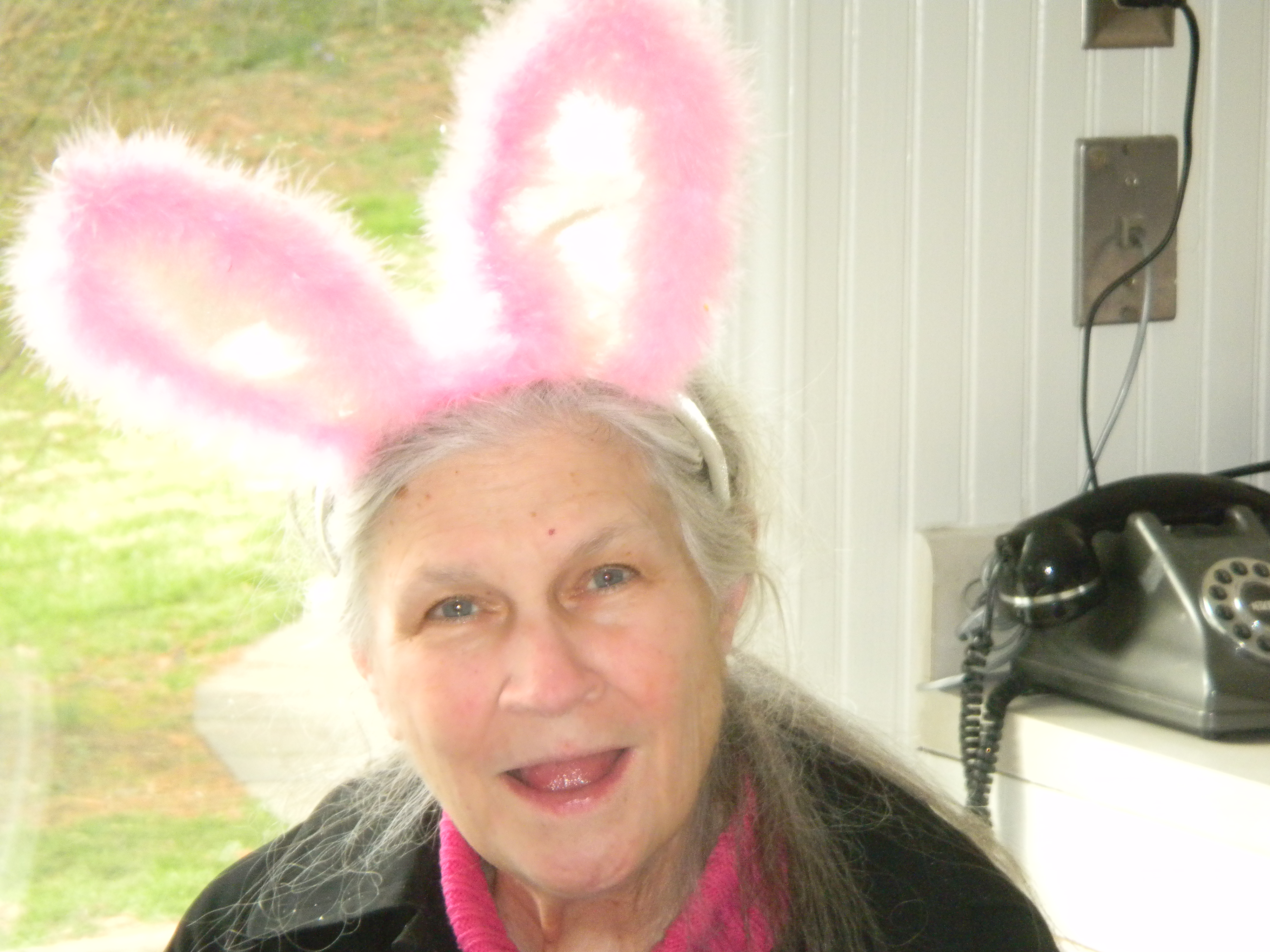 I’d take her to the Trumbull Mall with me in her yellow, “Christopher Robin” raincoat and everyone would smile as she tried to get the jelly beans out of the candy kiosk. Through Mom– others I’d meet would open up with stories of their family member struggling with dementia and I’d realize how much this illness is kept in the closet.

If only those glory days of hers could have lasted longer. On a hot Friday the 13th in July of 2012, Mom tripped on Toby, our Boston Terrier, and broke her hip. 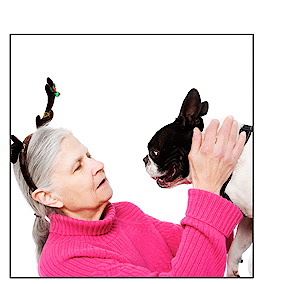 After that, we didn’t get out much and every day became groundhog day until the day she died. During those years, I’d think of how much music would bring a smile to Mom’s face. As a teenager, she was star struck by 1940’s movies when actors sang and singers acted. 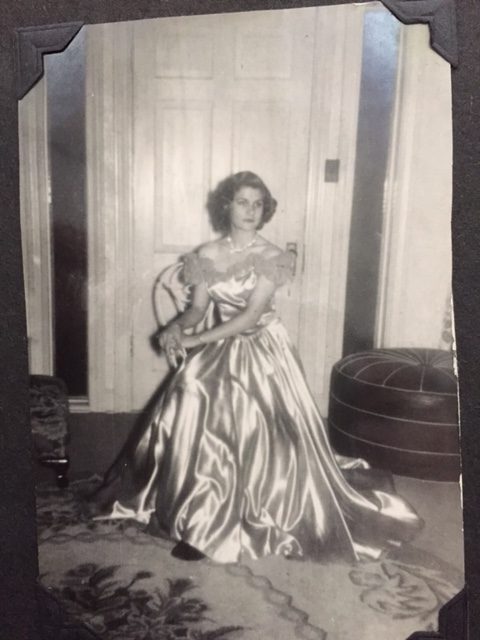 Her moment in the spotlight came in a talent show –She wore an orchid colored gown and with an orchid in hand brought the house down when she sang her rendition of Stardust and Unforgettable. Yes Mom, you could have been a star— you are a star in heaven now and you are UNFORGETTABLE! 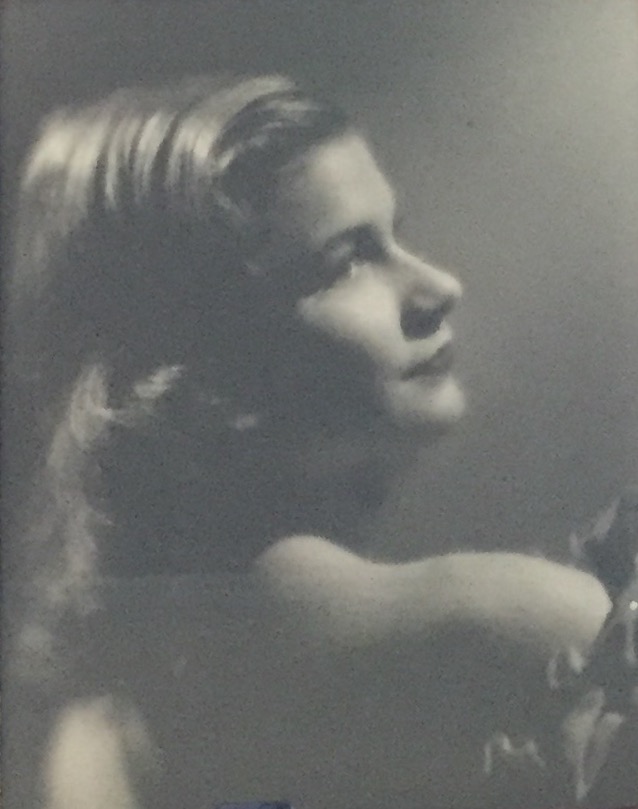